Posted on April 27, 2017 by universalhealthct

The latest news flash on health care from Capitol Hill in Washington:

It is now up to “moderate” Republicans to stop the (Un)American Health Care Act.

Thanks to negotiations with the far-right Freedom Caucus, a horrible bill to repeal and replace the Affordable Care Act (ACA) has become truly appalling.  What’s new?  Although President Trump “promised” during his campaign to leave pre-existing conditions alone.  The latest version of the bill would allow states to gut these protections.

Here’s a summary from the Center on Budget and Policy Priorities: 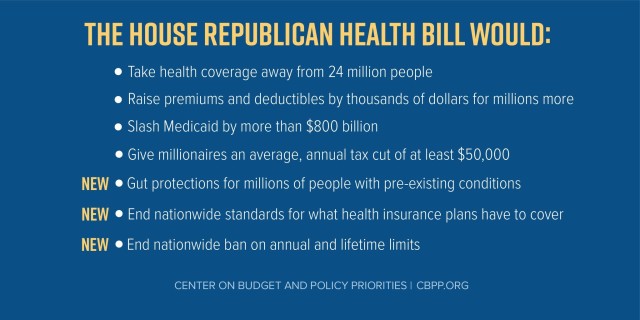 Predictions are all over the map about whether some states would decide to do this, but just having it out there as a possibility is extremely chilling.

The latest version of the bill means:

In other words, this bill is more cruel than ever.

It is so bad that the United Nations sent a five page letter to the Trump administration saying that taking health insurance away from millions of Americans could be a violation of international law.

Here’s another measure of how awful this bill is:

The original version EXEMPTED Congress members and their staffs from the bill!  While they may be scurrying to amend that provision, the fact that it was ever there is all you need to know that this is a toxic piece of legislation.

Even if they “fix” this hypocritical provision, do they have the votes to pass this abominable bill?  Again, predictions vary.  Some articles say that “moderate” Republicans are moving toward supporting the bill, others say they remain skeptical.

When a vote will occur is also contested.  Originally there were predictions of a vote on Friday or over the weekend.  Now there are reports that the vote may not happen until next week.

And it’s even possible that once again, AHCA will never actually come to a vote in the House, if the whip count shows that at least 23 Republicans are on the record that they will vote no.

But there is no question that Republicans are working hard to pass this bill.

YOU CAN TAKE ACTION TODAY

With so much on the line, it’s time for people in Connecticut to Take Action.  Here’s what you can do:

Call your member of Congress

Connecticut’s members of Congress are on record against proposals that gut the Affordable Care Act – but they want to hear from you.

Calls from their constituents give them back up when they oppose this in Congress.

How to reach your member of Congress:

Members of Congress on the Undecided/Unclear list need to hear from people in their districts who oppose this bill.

If you have family or friends who live in these states, please contact them today and ask them to call their member of Congress to tell them to vote against this latest attempt to gut the Affordable Care Act.

This entry was posted in From the Foundation, Jill Zorn and tagged ACA, ACA Repeal, Action, Affordable Care Act, Legislative. Bookmark the permalink.