CT Rallies to Protect Our Care

Posted on March 23, 2017 by universalhealthct

On a cold and blustery March day, 100 motivated activists and advocates showed up in Hartford to showcase all the good that the Affordable Care Act (ACA) has done for the people of Connecticut.

The crowd urged our state’s elected officials to stand up and protect the care that so many of us count on. Their personal health care stories and passion for the good they have derived from the ACA, Medicaid, Medicare and women’s health programs was palpable in the halls of the Legislative Office Building.

The event, organized by the Protect Our Care CT Campaign, was held on the eve of the anniversary of President Obama signing the ACA into law seven years ago, on March 23, 2010.

It was also the day before House Speaker Paul Ryan hoped to lead the Congress in a vote to gut the ACA and replace it with a bad health care deal for millions of Americans.

A morning press conference featured stories told by five people that illustrated how the ACA has helped them face health care challenges, get the care they needed and lead productive, full lives. 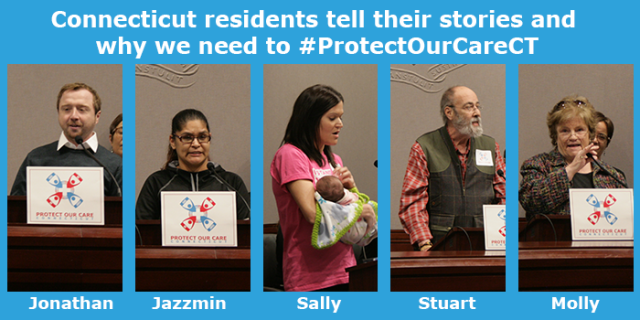 Jonathan from Meriden told of how the coverage he had through his parents, and the Access Health CT plan he purchased at age 26, has helped him manage his Cystic Fibrosis.

Jazzmin from Bridgeport explained how grateful she was to be able to find coverage she could afford via Access Health CT and get the care she needed to save her leg after a terrible motorcycle accident.

Sally, a self-employed contractor from Windsor, showed up with her 3-week old baby, Sadie and shared how coverage via HUSKY A (Medicaid) helped her and her children get important care through two pregnancies.

Stuart from Bethlehem shared his story of being able to get insurance coverage that, previous to the ACA, would have been denied due to pre-existing condition. And how his life was saved by that coverage when he was diagnosed with cancer and needed a bone marrow transplant.

And we heard the story of Therese, age 47 from Torrington, who thanks to a combination of Medicare, Medicaid and ACA Community First Choice funding, has been able to live independently and work part-time in spite of Spinal Muscular Atrophy, a debilitating health condition.  Her story was told by her co-worker, Molly.

A lot is at stake for Connecticut if Congress votes to gut the ACA. Too many people do not understand that the changes being proposed will raise the cost of care for many in the private health insurance market, eliminate Medicaid/HUSKY coverage for some vulnerable members of our community, and hurt the Medicare program – as well as put a big hole in our state budget.

Check out these resources to find out more about what the impact in Connecticut will be:

What’s at Stake for CT in the Proposed Health Care Bill?

American Health Care Act: Who gains and loses in Connecticut

What the GOP Obamacare replacement bill means for you and CT

And – sign up at protectourcarect.org to stay informed and get active.