Fighting for Health Care: The Time to Resist is Now

Posted on December 19, 2016 by universalhealthct 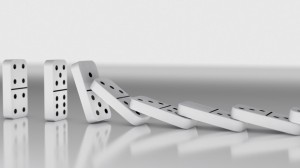 This is the current plan of the Republican majority in Congress and the Trump administration to break health care:

The first domino, is the looming human catastrophe and health care train wreck of ACA repeal.  The second domino, particularly drastic cuts to funding for Planned Parenthood, is quite likely to be part of the ACA repeal legislation, too.  The Medicaid and Medicare dominoes won’t be far behind.

The Consequences of ACA Repeal

Congressional Republicans have been promising to repeal the ACA ever since it was passed in 2010.  Thanks to a procedural technicality called budget reconciliation, they will only need 51 votes in the Senate to abolish major provisions of the law.  Speculation is rampant about when this vote will take place.  Right now is seems likely to occur in late January or in February at the latest.

Meanwhile, the consequences of hasty and reckless passage of repeal legislation are dire, even if attempts are made to delay the implementation of parts of the repeal package.

Experts predict that the elimination of the individual mandate, which is expected to be part of repeal legislation, will mean the individual insurance market will implode within the next year.

Republicans’ “repeal” promise has usually been accompanied by a “replace” promise; repeal is phase one and replace is phase two.  The problem is, no one knows when they are going to get around to phase two, if ever.

As Michael Miller of Community Catalyst warns, it will be important to follow the money in any ACA repeal bill.  Surprise, surprise, an ACA repeal is expected to include a “massive tax cut for the rich,” particularly the top 1 percent, and even more for the top 0.1 percent.   At the same time, this policy change would “raise taxes on average for low-and-moderate-income households.”  Any tax cuts made now in a repeal bill will mean those funds will not be available if and when replace legislation is finally passed.

This blog and series of tweets by Incidental Economist Nicholas Bagley, says it all:  a repeal bill will “cause untold harm,” and the promises for a “seamless” transition to a “terrific” replacement may never happen.

Here at Universal Health Care Foundation of Connecticut, the fight begins now to resist the repeal of the ACA and the attacks on Medicaid, Medicare and women’s health.  As a start, we ask that you sign our petition, to show your support for Senators Blumenthal and Murphy as they work to stop their Senate colleagues from destroying the health care programs we rely on.

As events in Washington unfold, we will focus on what their impact will be on Connecticut residents, and work in coalition with others to preserve the health care gains made in our state.  We’ll monitor how other states are responding and make sure those ideas are considered here in Connecticut.

But we can’t only work on defense, we need to be on offense, too.  Now, more than ever, we need quality, affordable health care every family can count on.  That is what our #Fight4Better campaign is all about.  Watch our blog and like our Facebook and Twitter sites as more details of the campaign unfold.

This entry was posted in Jill Zorn and tagged Affordable Care Act. Bookmark the permalink.