Update on Health & The State Budget

Posted on May 1, 2015 by universalhealthct 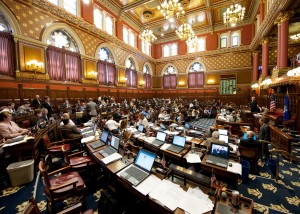 This week brought new developments in the state budget conversation.  Now that state legislators have released proposals for spending and revenue, let’s take a look at how health care has fared.

To set some context, we wrote about proposed cuts to health care in the governor’s budget (here and here), back in March.

A quick note – there are two budget proposals from the legislature:

The Republican budget also restored many cuts to health and social services proposed in the governor’s budget, although they proposed different ways than the Finance, Revenue and Bonding Committee to pay for the cuts.

The combined Democrat and Republican budgets demonstrate a general will on the part of legislators to avoid these cuts.  Neither budget was well-received by the governor.

Here is a snapshot of health care spending in the Appropriations Committee budget:

As the legislative session continues and the state budget is finalized, we will keep you posted on new developments.  The session is set to end on June 3, 2015.

CT Mirror has extensive articles in their Budget/Economy section, as well as a Track the Budget tool that has been updated (it is very handy at keeping track of all the proposals out there)

This entry was posted in Max Friedman, Rosana G. Ferraro and tagged Legislative. Bookmark the permalink.

1 Response to Update on Health & The State Budget