The Rundown on GOP Budget Proposals

Posted on March 26, 2015 by universalhealthct 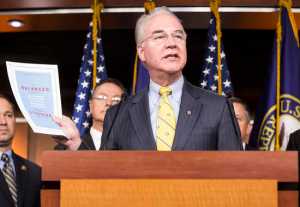 The recent release of Senate and House Budgets in Congress has generated a lot of buzz in health care circles.

Both the Senate and House have their own budget; since both bodies have a Republican majority, the GOP controls the budget process in Congress.  The Senate Budget is known as the Enzi Budget Plan, named after Senator Mike Enzi, the chairman of the Senate Budget Committee.  Similarly, the House Budget is known as the Price Budget Plan, named after Representative Tom Price, chair of the House Budget Committee (a role recently vacated by Representative Paul Ryan).

These budget plans are not final—the two documents will eventually have to become one finalized budget—but they do give us a good idea of what kinds of fights are on the horizon.

We’ve included links to trusted sources that discuss the potential implications of each budget:

This entry was posted in Rosana G. Ferraro and tagged Legislative. Bookmark the permalink.